Around 2000BCE, most likely in the Caucasus region in South-west Asia, iron replaced bronze as the predominant metal in society for implements and weapons.  This shift occurred because iron, when alloyed with a bit of carbon, is harder, more durable, and holds a sharper edge than bronze.  For over three thousand years, until replaced by steel after CE 1870, iron formed the material basis of human civilization in Europe, Asia, and Africa.

In order to use iron for various implements and weapons a process called Smelting was used to extract iron from iron ore.  When iron ore is heated in a charcoal fire, the iron ore begins to release some of its oxygen, which combines with carbon monoxide to form carbon dioxide.  In this way, a spongy, porous mass of relatively pure iron is formed, intermixed with bits of charcoal and extraneous matter liberated from the ore, known as slag.

This slag is separated from the iron through the use of flux, that is crushed seashells or limestone.  With this the then primitive blacksmith would hammer it on an anvil to create Wrought Iron. This would contain 0.02-0.08% of carbon, all of which was absorbed from the charcoal.  This amount of carbon was just enough to make the metal tough and malleable for use throughout the iron age.

The Late Middle Ages and the development of Cast Iron

During the latter part of the iron Age it was discovered that if iron is heated to a very high temperature then it will have a higher content of carbon, from 3 to 4.5 percent.  Because this type of iron could not be forged it had to be produced in a blast furnace, a tall chimney-like structure in which combustion was intensified by a blast of air pumped through alternating layers of charcoal, flux, and iron ore.

Medieval ironworkers also learned to harness water wheels to power bellows to pump the air through blast furnaces and to power massive forge hammers.  This molten iron was run directly from the base of the blast furnace into a sand trough, and the sound of the iron in this trough resembled a sow suckling a litter of piglets, and iron produced in this way thus came to be called pig iron.  Often this iron was poured into a mold to make a variety of objects such as stoves, pots, pans, firebacks, cannon, cannonballs, or bells.    In order to do this the iron was either cast directly into molds at the blast furnace base or re-melted from pig iron, and so because of this it came to be known as cast iron.

In the late 18th century the industrial Revolution in England began to gather pace.  Mechanized machinery and the emergence of factories increased demand for the more useful wrought iron, which could be used to make into the more useful narrow strips of steel, rather than the hard and brittle cast iron.  Around 1784 an Englishman, Henry Cort, modified the blast furnace to create the puddling furnace. 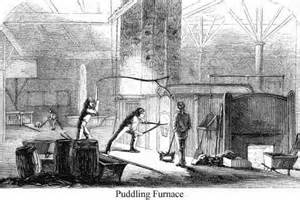 This could transform cast pig iron into the more useful wrought iron by oxidizing excess carbon out of the pig iron.  The puddling furnace required the stirring of the molten metal, kept separate from the charcoal fire, through an aperture by a highly skilled craftsman called a puddler; this exposed the metal evenly to the heat and combustion gases in the furnace so that the carbon could be oxidized out.  As the carbon content decreases, the melting point rises, causing semi-solid bits of iron to appear in the liquid mass.  The puddler would gather these in a single mass and work them under a forge hammer, and then the hot wrought iron would be run through rollers (in rolling mills) to form flat iron sheets or rails.

Although the puddling furnace was undoubtedly a big improvement on the blast furnace, it was still a highly inefficient way of producing steel.  By the mid-nineteenth century, with the advent of the railways as the preferred choice of transport over the horse-and-cart, the demand for steel had increased exponentially.  The first railroads ran on wrought iron rails which were too soft to be durable.  On some busy stretches, and on the outer edges of curves, the wrought iron rails had to be replaced every six to eight weeks.  As explained earlier, wrought iron, which has been used since ancient times, has a little carbon (.02 to .08 percent), just enough to make it hard without losing its malleability.  Cast iron, in contrast, has a lot of carbon (3 to 4.5 percent), which makes it hard but brittle and nonmalleable.  In between these is steel, with .2 to 1.5 percent carbon, making it harder than wrought iron, yet malleable and flexible, unlike cast iron.  These properties make steel more useful than either wrought or cast iron.  But yet prior to the mid-nineteenth century, there was no easy way to control the carbon level in iron so as to manufacture steel cheaply and efficiently, especially for objects such as iron nails for the burgeoning industry of the railways.

And yet in order to meet this huge demand for steel many industrialists began to search for better designs and more up-to-date technology, which could compared to the puddling furnace, convert a whole large mass of molten pig iron into steel in a short space of time, and without the extra expense of using tons of fuel and labour. 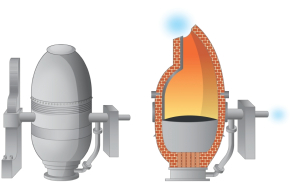 This became possible in 1856 when the British metallurgist Sir Henry Bessemer, designed what he called a converter, a large, pear-shaped receptacle with holes at the bottom to allow the injection of compressed air.  Bessemer reasoned that carbon in molten pig iron unites readily with oxygen, so a strong blast of air through molten pig iron should convert the pig iron into steel by reducing its carbon content.  Bessemer filled his converter with molten pig iron, blew compressed air through the molten metal, and found that the pig iron was indeed emptied of carbon and silicon in just a few minutes.

Of course like all significant technological breakthroughs, the first prototype did have many flaws and these were remedied and improved upon by several other metallurgists.  The first such person was another British man, called Robert Mushet, who showed that the air blast in the Bessemer Process actually removed too much carbon and left too much oxygen behind in the molten metal.  This made necessary the addition of a compound of iron, carbon, and manganese called spiegeleisen (or spiegel for short):  the manganese removes the oxygen in the form of manganese oxide, which passes into the slag, and the carbon remains behind, converting the molten iron into steel.

Another shortcoming of the initial Bessemer process, however, was that it did not remove phosphorus from the pig iron.  Phosphorus makes steel excessively brittle.  Initially, therefore, the Bessemer process could only be used on pig iron made from phosphorus-free ores.  Such ores are relatively scarce and expensive, as they are found in only a few places (e.g. Wales and Sweden, where Bessemer got his iron ore, and upper Michigan).  In 1876, the Welshman Sidney Gilchrist Thomas discovered that adding a chemically basic material such as limestone to the converter draws the phosphorus from the pig iron into the slag, which floats to the top of the converter where it can be skimmed off, resulting in phosphorus-free steel, (this is today called the basic Bessemer process, or the Thomas basic process.)

The effect of both of these innovations, the inclusion of Spiegel after the molten pig iron is blasted with air, along with the addition of limestone to the Bessemer process, led to skyrocketing production of cheap steel in Europe and the U.S.  The famous industrialist of the late nineteenth century, who was at the forefront of this explosion of cheap steel was Andrew Carnegie. 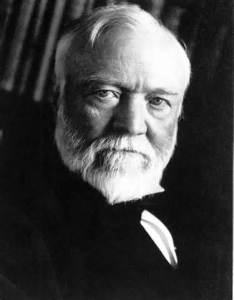